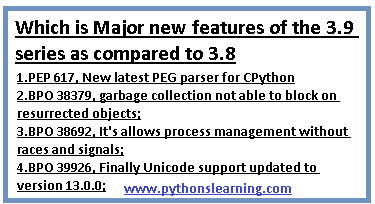 Welcome to our blog for the latest news on python programming. so finally python developer announced that 3.9.0rc2 is now available for testing.

Remember this point: This is a preview release and its not use recommended for production environments.

This is the first latest version of Python to default to the 64-bit installer on Windows os. Now the installer also actively disallows installation on Windows 7 os. Python 3.9.0 is not compatible with this unsupported version of Windows.

The 3.9 version is now accepting changes for 3.9.1. To increased stability, the final release version will be cut from 3.9.0rc2.

Which is Major new features of the 3.9 series as compared to 3.8

Some of the following new major features and changes in Python 3.9 are:

Some important FAQ about python 3.9.0rc2.
1) when will python 3.9 be released
Python 3.9 is directly released on Monday, 04 October 2020. Prior to showing the official version, the developers had planned to release six alpha, five beta preview versions, and two release candidates.
2) How to python 3.9 beta download
Directly visit https://www.python.org/downloads/
3) Different python 3.9 performance
please read the new major features and changes in Python 3.9
Tags:
Which is Major new features of the 3.9 series as compared to 3.8, when will python 3.9 be released, How to python 3.9 beta download, Different python 3.9 performance
If you want to learn a python data science course then click on it.
BEST OF LUCK!!!
[email protected]