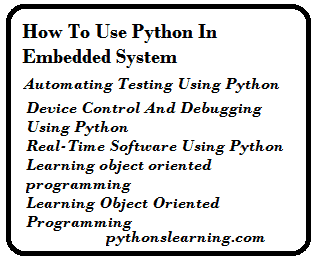 Hello friends in this article we will learn How to use python in Embedded System. so let’s:

We know that at that time python language is one of the most trending language. Python language support to different operating system like Linux, Windows etc. and it’ also compact with Raspberry Pi.

Python for automated testing is that regression tests can be developed that constantly test and exercise the system. Any code changes that result in bugs will be immediately discovered.

During the embedded software development process, developers often find themselves analyzing bus traffic such as SPI or I2C, USB.  Python is one scripting languages that is normally supported, sometimes exclusively, to interface with and control the tool.

The most widely used Python version for real-time is the MicroPython  that is designed to run on microcontrollers . Micro Python is not alone though. Companies such as Synapse and OpenMV are using either Micro Python or their own Python port within embedded systems.

We know that python language is also modern and has the ability to be structured in a free-form script type manner or as a sophisticated object oriented architecture. Python has proven to be easy to learn and also very versatile. There are even instances where electrical engineers with no programming experience have been able to take Python and write useful test scripts or perform board check-outs with a minimal time investment.

Python can be used to receive critical embedded system data that can then be stored in database or locally for analysis. Developers can use Python language to develop real-time visualizations of data that show critical parameters or store and save those parameters for later analysis.