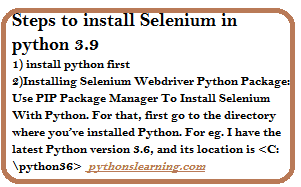 ● Python supports the Object-Oriented Programming approach to establish the applications. It is simple and easy to learn and provides lots of high-level data structures. It is an open-source language.

● It is a high-level and interpreter scripting programing language.

● Less burden and stress for testers – As mentioned above, the amount of time required to do testing repeated test scenarios on each and every new build is reduced to zero, almost. Hence, the burden of tester gets reduced.

● Cost reduction for the Business Clients – The Business needs to pay the testers their salary, which is saved using automation testing tool. The automation not only saves time but gets cost benefits too, to the business.

concept of selenium in python 3.9

● The Selenium test scripts can be written in any programming languages like Java, Python, C#, Ruby, Perl, as so on.

● The Selenium test scripts can be executed in many operating system platforms such as Windows, Mac, Linux, etc.

● And the test scripts can be implemented on different browsers like Google Chrome, Mozilla Firefox, Internet Explorer, Safari, etc.

● The Selenium testing tool can be associated with other testing tools such as TestNG, Junit for managing the test cases, and generating test reports.

Steps to install Selenium in python 3.9

2)Installing Selenium Webdriver Python Package: Use PIP Package Manager To Install Selenium With Python. For that, first go to the directory where you’ve installed Python. For eg. I have the latest Python version 3.6, and its location is <C:\python36>

3)Use the <pip> tool to install the Selenium Webdriver package with following line of code:

4)To upgrade the currently installed Selenium Webdriver package then, just add the -U flag to the previous <pip> command, i.e.

5)After we have set up Python and Selenium WebDriver, the next important step is to either pick an editor or an IDE (Integrated Development Environment) for writing the test scripts.

In this article we saw how to install selenium webdriver for python 3.9 so about this section you have any query then free to ask me

How do you create expense tracker in python

1 thought on “how to install selenium webdriver for python 3.9”