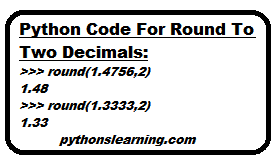 Python Code For Round To Two Decimals
Spread the love
more

we know that Python round() function requires two arguments.

So to round the number to 2 decimals, give second argument as 2. If third digit after decimal point is greater than 5, then last digit is increased by 1 position .

several ways to round decimal digits in python :

Python Code For Round To Two Decimals on Trinket :

Which is python online compiler for data science

To sponsor us, please drop us an email at [email protected]
Most of the visitors are Software-Developers and Engineering Students.
50% visitors were from India, 20% from USA , 10 % Canda and 20% from OTHER.
Paid Guest Post also available.